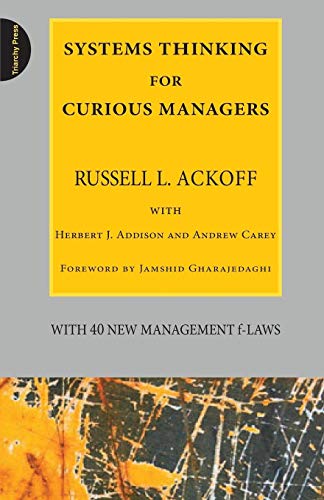 Finished just before Professor Ackoff's death late in 2009, Systems Thinking for Curious Managers opens the door to a joined up way of thinking about things that has profoundly influenced thinkers and doers in the fields of business, politics, economics, biology, psychology.

Although Systems Thinking was 'invented' early in the 20th century, even Peter Senge's best-selling "The Fifth Discipline" (Systems Thinking is the fifth discipline) failed to popularize the term. But now, in business and academia, in the public sector and in the search for solutions to the environmental problems we face, Systems Thinking is being talked about everywhere.

This timely book presents 40 more of Russ Ackoff's famously witty and incisive f-Laws (or flaws) of business - following on from his 2007 collection "Management f-Laws". All those in this collection are new and previously unpublished. Andrew Carey's extended introduction ties these f-Laws into the rest of Ackoff's work and gives the reader new to Systems Thinking a practical guide to the implications of Systems Thinking for organisations and managers.